Nikkei Asia is tracking the spread of the coronavirus that was first detected in the central Chinese city of Wuhan.

Cumulative global cases have reached 259,375,348, according to Johns Hopkins University in Baltimore. The worldwide death toll has hit 5,173,856.

For more information about the spread of COVID-19 and vaccination progress around the world, please see our interactive charts and maps.

— Status of vaccinations around the world

9:50 a.m. Australian business investment slipped in the third quarter as pandemic lockdowns shut many businesses, government data shows, though future spending plans proved resilient and a rapid recovery is expected now that most restrictions have been lifted. Capital expenditure fell a real 2.2% in the third quarter to 32.7 billion Australian dollars ($23.57 billion), in line with market forecasts of a 2% drop. Spending plans for the year to end June 2022 were upgraded to A$138.6 billion, above most analysts’ estimates.

9:46 a.m. South Korea’s central bank lifts its key interest rate to 1% from 0.75% as it fights rising prices and soaring household debt. The Bank of Korea’s seven-member monetary policy board agreed on the move, after having raised the rate by 25 basis points three months ago. 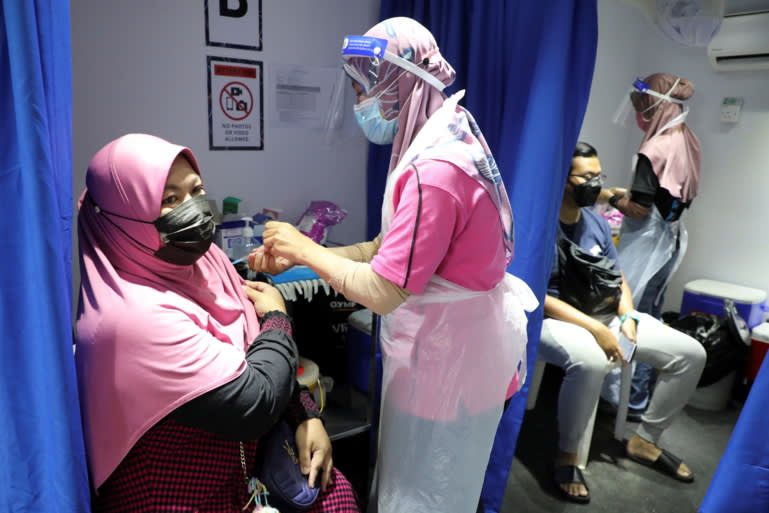 A quarantine-free travel lane at the border crossing between Singapore and Malaysia will open on Nov. 29 for people vaccinated against COVID-19.

7:23 p.m. Singapore and Malaysia next week will launch a quarantine-free travel lane at their border crossing, one of the world’s busiest, for vaccinated people, the two countries said. Effective Nov. 29, the plan expands on an already announced move to start a travel lane for flights between Changi Airport and Kuala Lumpur International Airport from next week. The land travel lane in the first phase will apply to citizens, permanent residents or long-term pass holders of the country they are entering, to allow family visits, the office of Singapore’s prime minister said in a statement.

11:43 a.m. South Korea reports a new daily record of 4,116 new coronavirus cases for Tuesday as it battles to contain a spike in serious cases requiring hospitalization, the latest data from the Ministry of Health and Welfare shows. Commuters in Seoul on Nov. 17 are reminded to wear masks as daily infections in South Korea spike.

11:34 a.m. New Zealand’s central bank lifts interest rates for the second time in as many months, driven by rising inflationary pressures and as an easing of coronavirus restrictions supports economic activity. The Reserve Bank of New Zealand raised the official cash rate by 25 basis points to 0.75% in the final policy meeting of the year, saying it was appropriate to continue reducing monetary stimulus to maintain price stability and support maximum sustainable employment.

11:07 a.m. WHO’s chief scientist says that despite hundreds of millions of COVID-19 infections and millions of deaths, humanity has only experienced “the tip of the iceberg.” As such, Dr. Soumya Swaminathan is urging countries to further invest in and strengthen primary health services. In addition, she is encouraging wealthier nations to adopt “no country left behind” policies. “The pandemic has also brought out the gaps, the inequities within countries and between countries,” she said in opening the Asia Summit on Global Health.

9:10 a.m. The Singaporean government forecasts a growth rate of 3% to 5% for 2022, predicting a continued rebound from COVID-19 as global borders gradually reopen and domestic restrictions ease. The projected expansion, however, is slower than this year’s forecast of “around 7%” — a slight upgrade from the previous “6% to 7%” projection, after a 5.4% contraction in 2020.

6:10 a.m. The coronavirus pandemic has spurred a sharp rise in demand for influenza vaccines in India, according to hospital operators there. While a lack of access and high prices had stymied broader adoption, increased awareness has led to an upswing in shots this year after a massive wave of COVID-19 cases in the spring.

Daily fatalities there had doubled to nearly 4,200 a day last week from around 2,100 at the end of September. More than 1.5 million people have already died across the 53 countries, according to the organization.

“As we approach the end of 2021, let’s do everything we can by getting vaccinated and taking personal protective measures, to avoid the last resort of lockdowns and school closures,” says Dr. Hans Kluge, the WHO’s regional director for Europe. The organization’s European region includes both Europe proper and Central Asia. Students leave school after attending classes on Nov. 22 following the reopening of elementary schools after months of closure due to a COVID-19 outbreak in Ahmedabad, India.

1:48 p.m. India reports 7,579 new cases in the last 24 hours, down from 8,488 the previous day and the lowest daily count since May last year, bringing the country’s total infections to over 34.52 million. Deaths rose by 236 to 466,147. Meanwhile, the country has administered about 7.2 million vaccine doses since Monday morning, bringing total vaccination coverage to more than 1.17 billion doses.

11:00 p.m. Some 73% of Japanese tourism businesses, including hotels, rail operators and amusement facilities, reported an increase in customer traffic in October, after the full lifting of the state of emergency declaration, according to a Nikkei poll.

Some hotels in northeastern Japan saw a 400% increase in reservations from the July-August period, thanks to travelers coming to see fall foliage.

But a full recovery remains a long way off. For many companies, the increase has been limited to 10% to 20%. Eighty-four percent of respondents said business has yet to recover to pre-pandemic levels. 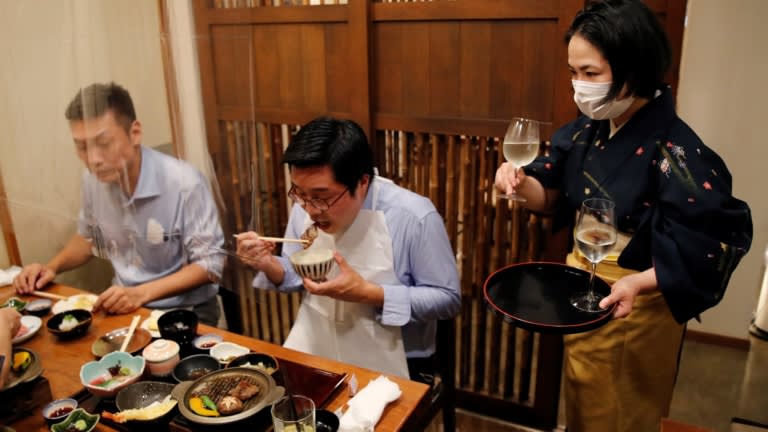 Japan has eased curbs on restaurants’ operating hours since October as infections continue to fall.

5:12 p.m. Tokyo reports just six new cases, down from 20 a day earlier and the lowest daily count this year. Following a dramatic decline this fall, the number of new infections in the capital has been below 100 since Oct. 9, while Japan has eased COVID curbs such as removing a limit on operating hours for eateries.

3:30 p.m. Thailand’s unemployment rate hit a more than 16-year high in the third quarter, as tougher coronavirus restrictions affected economic activity and jobs, the state planning agency says. The unemployment rate jumped to 2.25% in the September quarter, representing 870,000 workers without jobs, from 1.89% in the previous three months. The curbs were eased from September, however, and the country earlier this month reopened to vaccinated foreign visitors without quarantine requirements. India logs 8,488 new cases in the last 24 hours, the lowest daily total in one and a half years.

1:50 p.m. New Zealand will adopt a new policy of living with the virus, starting Dec. 3, which will end tough coronavirus measures and allow businesses to operate in Auckland, its biggest city, Prime Minister Jacinda Ardern says. New Zealand has been unable to stamp out an outbreak of the highly infectious delta variant centered in the country’s largest city.

“The hard truth is that delta is here and not going away, but New Zealand is well set to tackle it because of our high vaccination rates and our latest safety measures, including the traffic light system and Vaccine Pass,” she said.

11:30 a.m. South Korea reports 2,827 new cases, down from 3,120 a day earlier. However, it is the highest daily tally for a Monday, when announcements usually include totals lower than those for other weekdays due to fewer tests being administered on weekends, according to the Yonhap News Agency. The number of patients in serious condition remains high, marking the third straight day the country logged over 500.

10:00 a.m. Australia on Dec. 1 will open its border to fully vaccinated eligible visa holders, who will not have to apply for a travel exemption, Prime Minister Scott Morrison says. In addition, all fully vaccinated travelers from Japan and South Korea will be allowed into the country beginning next month. Australia’s largest cities, Sydney and Melbourne, opened their borders to international travelers on Nov. 1, although the easing of entry rules only benefited returning citizens and permanent residents.

7:00 a.m. Riots broke out in cities across the Netherlands on Sunday, the third night in a row that police clashed with mobs of angry youths who set fires and threw rocks to protest COVID-19 restrictions. Unrest was reported in locations including Leeuwarden and Groningen in the north, the eastern town of Enschede and Tilburg in the south. The protests were sparked by opposition to government plans to restrict use of a national corona pass to people who have either recovered from COVID-19 or have been vaccinated, excluding those with a negative test result.

4:20 a.m. Brussels saw about 35,000 protesters take to the streets of the Belgian capital over government-imposed restrictions amid the country’s recent rise in COVID-19 cases. Confrontations broke out between demonstrators and police, with some protesters throwing smoke bombs and fireworks, the newspaper Le Soir reports.

4:08 a.m. The U.S. Marine Corps is on pace to have the worst vaccination record among American military branches as up to 10,000 active-duty personnel are set to miss the service’s Nov. 28 deadline, The Washington Post reports. While at least 94% of Marines have already met President Joe Biden’s COVID-19 vaccine requirements or are on track to do so, the unvaccinated 10,000 are too late to start and complete the process by the deadline. The Navy has the highest vaccination rate within the U.S. military, at 99.7%.

3:02 a.m. Russian President Vladimir Putin received a booster shot against COVID-19, Russian news agencies quote him as saying. Putin in June said he had been vaccinated with Sputnik V vaccine.

11:22 p.m. Two people are hospitalized in the Dutch city of Rotterdam on Saturday after they were seriously injured when police fired shots during a protest against COVID-19 measures, authorities say. Reuters reports crowds of several hundred rioters torched cars, set off fireworks and threw rocks at police during the protests last Friday. Police responded with warning shots and water canons.

Protesters gathered to voice opposition to government plans to restrict access to indoor venues to people who have a “corona pass,” showing they have been vaccinated, have already recovered from an infection or have proof of a negative test.

10:44 p.m. A compulsory quarantine ends for 111 Cathay Pacific employees who had stayed in the same hotel in Germany as three pilots who tested positive for COVID-19. Cathay Pacific Airways fired the three cargo pilots who were infected with COVID-19 during a layover in Frankfurt, over an unspecified “serious breach” of crew rules while overseas. Hong Kong’s Centre for Health Protection of the Department of Health says it has ended the compulsory quarantine of the 111 staff, but 10 aircrew members were classified as close contacts and were asked to remain in isolation.

3:21 p.m. Singapore will relax curbs on social distancing from Monday, government ministers say. Limits on social interactions and dining out will be expanded to five people from the current rule of up to two vaccinated people. Singapore’s number of daily COVID-19 cases has fallen below 3,000 on average. About 85% of the island nation’s 5.45 million people have been vaccinated.

2:46 p.m. Hong Kong approves lowering the age limit for the COVID-19 vaccine from China’s Sinovac Biotech to three years old from 18, as it pushes to incentivize more of its 7.5 million residents to get inoculated, according to Reuters. “Adolescents aged 12 to 17 will be accorded priority to receive the CoronaVac vaccine, with a view to extending to children of a younger age group at a later stage,” said Hong Kong Secretary for Food and Health Sophia Chan.